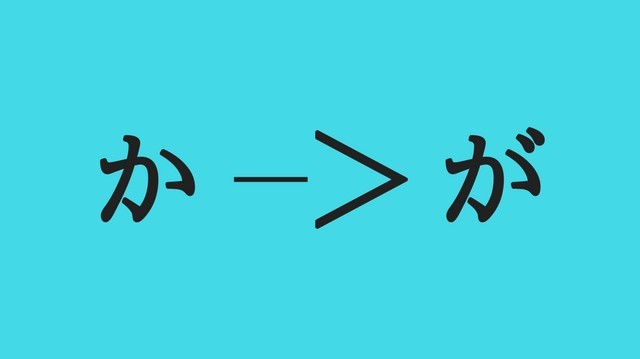 Now we begin the second half of Part One. In order to understand these next few groups of sounds and kana, we first have to go over the concepts of voiced and un-voiced consonants.

Basically speaking, voiced consonants are the ones that engage your vocal cords in order to create the sound.

That of course means that un-voiced consonants are the ones that do not engage your vocal cords.

Let’s do a couple of exercises to illustrate this point.

Take the palm of your hand and press it lightly against your throat. Once you are in that position, make a “sssssssssss” sound and then make a “zzzzzzzzzz” sound.

Now try alternating between the two a few times in succession.

It’s pretty simple to understand, and it’s important to know consciously in order to learn the upcoming Japanese sounds rapidly.

Turning unvoiced consonants into voiced ones:

So here’s where knowing all the basic hiragana comes in handy. There are a few unvoiced consonants that you’ve already learned that have voiced counterparts.

What this means is that your mouth and tongue positions will be exactly the same when you make each sound, and the only change will be that you engage your vocal cords.

For today’s lesson, that means we will take every Japanese sound that begins with [k] and turn it into a [g].

This is notated with hiragana by adding two small strokes in the upper right corner (called daku-on).

Let’s take a look at each transformation and then learn the new group.

These new kana are written just like the old ones. You just need to add the two small dashes at the end.

Of course you will hear voiced and unvoiced consonants together all the time, so it’s a good idea to start practicing them now.

It’s time to apply this new knowledge and make it a part of your permanent memory.

Also, there’s one more special thing I want you to do for today’s homework:

Be sure you are paying special attention to the way each one feels when you make each sound.

This will really help you to understand, on a physical level, the differences between voiced and un-voiced consonants.

Moving on, there are a relatively small number of sounds that have a voiced equivalent like we saw today. That means it won’t take very long to get through this section on consonants.