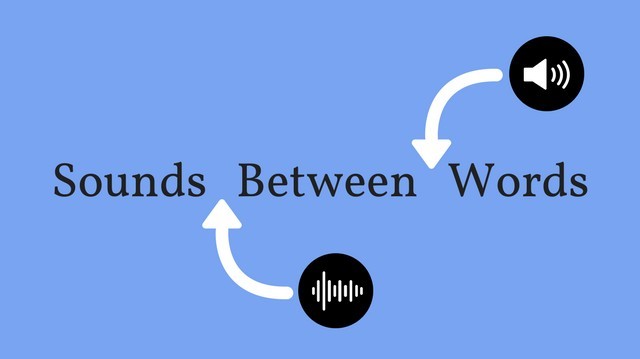 When natives talk to one another, they don’t typically pause between words. This is especially true for languages that have a natural flow from the end of one word into the beginning of another.

It’s tough as a beginner to know where one word ends and the next one begins when listening to Japanese, but with practice and time it becomes easier.

Eventually it’s not a problem at all.

Let’s look at the situations where the sounds of Japanese change because of the words that follow one another.

Once you know how these situations work, and you practice listening to them and repeating them yourself, you will eventually come to the point where it’s a non-issue for you.

As I’m sure you remember the Japanese language only has five separate vowels. That means that there are going to be a decent amount of times where the ending vowel of a word is the same as the beginning vowel in the next word.

A very common example of this is the everyday phrase “See you tomorrow” in Japanese.

The way you way it in Japanese is with the word “again” which is また and the word “tomorrow” which is あした, and you do so in that order as well.

I don’t want to get into any grammar rule for Japanese right now since this course is entirely focused on sounds, so if you’re new to Japanese then don’t worry about grammar at this point.

I just want you to listen to how these two words sound when they are used in this phrase.

Now if you learned these two words separately, you might be tempted to put a short silence in between them as また あした [ma-ta … ash-ta].

But that would be incorrect.

Instead this phrase sounds like a single long word as [ma-taa-shh-ta]. As you can see, I’ve underlined the part that sounds as if it were an elongated vowel.

This example illustrates how two separate words, また and あした, sound as if they were one word in natural spoken conversation.

But you have to be careful that you don’t assume that all concurrent vowels between words will make it sound like a single word.

You may remember back when I talked about elongated vowels that sometimes the vowel is reiterated.

A very common example of this is when Japanese people say “I think… such and such.”

For example, if you wanted to say “I think it’s a dog” in Japanese, you would say:

Now normally there aren’t spaces between words in written Japanese, but I put them in for this example so that you can clearly see where one word ends and the next one begins.

The point to pay attention to here is the 「と おもいます  」 even though the first mora ends with an [o] sound and the next word begins with the same [o] sound, it does not sound like a single, elongated [o].

What I want you to get from this section is the awareness that sometimes concurrent vowels between words will make it seem like a single sound, and sometimes the sound will be reiterated.

This is just like how it was when the sounds occurred within a single word in the last section, and now you know that it also happens between two words in sentences.

There are actually relatively few situations where a stop sound occurs between two words. This is because (for the most part) no stand alone words begins with a stop sound.

However, there are a couple of things that can get added unto words that create a stop sound between them.

The most common one is when you are quoting someone. In Japanese this can be done by added って to what was said.

So the phrase “He said hello” would be かれ は 「こんにちは」 って.

The thing to notice is that there normally isn’t a stop right after the word “hello” but a stop gets added when you are quoting it.

What usually happens in full sentences and stop sounds is that, there are several stop sounds really close to one another and it makes the whole sentence sound weird to an English native since we don’t normally have that type of thing.

For example, if you were going to ask someone to “take the book with you” it would be ほん を もって いって。

That middle part 「もって いって 」 is a little tricky for beginners to get used to. There are occasionally sentences that have even more of these types of stop sounds in quick succession, which again, take focused listening and practice to really get down.

Like if you were quoting the second example, as in the following:

I find that the best way to master these situations is to listen to it repeatedly, and think of it like you would the beats of a song.

Listen to the rhythm and flow of it, and try to replicate that aspect of it without worrying too much about the meaning behind the words and such.

Then once you’re comfortable with saying it yourself, you can focus more on fully understanding the English translation and how it all matches up.

If you remember the rule for the silent or semi-silent vowels from Section Two of this course, then you can probably already guess how it works in this part too.

The rules are pretty much the same: If the [i] or [u] vowel occurs between two of the un-voiced consonants, then it will become “devoiced” which means that it will be either completely silent, or mostly silent (like 90% or more).

What this means for sentences is that if the final sound in a word is [i] or [u], and the beginning sound of the next word is [k], [s], [t], or [h] then the devoicing will occur.

It’s pretty simple, so let’s just look at a few examples (I have colored where the devoicing happens):

I actually had a rather hard time finding examples of this situation, which may be a good indicator that it doesn’t happen all that often.

As I mentioned before, Japanese words have a pitch accent in a similar manner to the way that English words have a stress accent.

But sometimes the pitch pattern will change for a word depending on which word immediately follows it within the context of a complete sentence.

As you can see, the pitch accent pattern of でした changed based off of the word that came right before it.

This can get tricky since the pitch-accent patterns you learn in isolation, don’t always hold up in full sentences.

Now this may sound like it would be a hard concept to learn in practice and remember, but actually what happens is that once you’ve listened to and repeated enough full sentences in Japanese yourself, you will naturally begin to do it too.

The best advice is to never study a new word in isolation, but rather to learn it in a way that natives use it in real life.

This is a concept that I am going to go into in depth in the next lesson since it is something that you absolutely must know.

For now though, what you need to be aware of is that a full sentence will sometimes change the pitch accent patterns of a word or two that it uses.

The Power of the Sentence

This is really the final stage of the game, since this is how people actually use the language in real life.

You’ve learned a lot in this lesson, even if a lot of it was almost identical to the things you learned in Section Two of the course.

We now need to talk about the language at a sentence level, and become aware of why it isn’t just a good idea, but is actually necessary to learn Japanese in full sentences!

Continue on when you are ready.