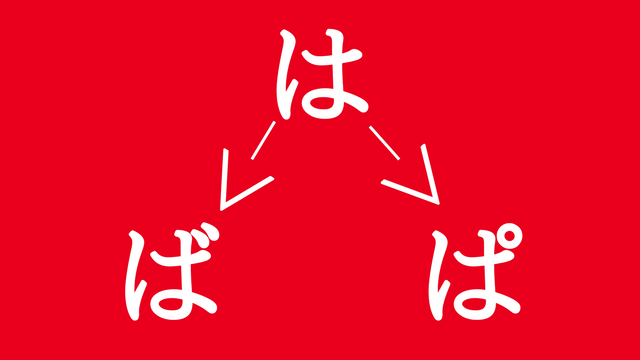 The last two sounds are [b] and [p]. The interesting thing is that [h] is the un-voiced counterpart for both of them!

Since we use the same base kana for all three, there needs to be a new way to differentiate them from one another.

Here’s how it goes:

The [h] sound is the default. For example, [ha] is written as は in hiragana.

The [b] sound is the daku-on version, which means that it will receive the two small dashes. Using the same example from above, [ba] is written as ば in hiragana.

The [p] sound will receive a small circle instead of dashes. This is called a handaku-on and if we keep with the previous examples, we see that [pa] is written as ぱ in hiragana.

The [b] and [p] sounds in Japanese

The [b] consonant makes the following sounds with each vowel:

The [p] consonant makes the following sounds with each vowel:

Example words, chosen just for you!

Is this the last practice? Maybe!

You know the drill:

You’re on the homestretch!

Congratulations! You have so far completed all of the sounds of Japanese that are represented by the basic hiragana, the daku-on hiragana, and the handoku-on hiragana!

There is only one group of single mora sounds left and they are known as you-on or “combination” hiragana.

Once you’ve learned them, you will have finished Part One of this course in its entirety!