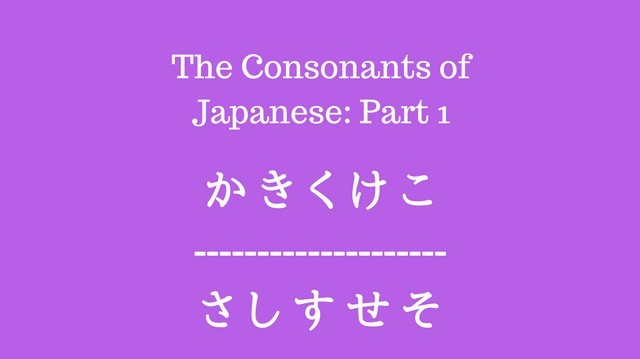 In Japanese, all consonants are combined with one of the five vowels from the previous lesson. There is one exception to this rule, but we don’t need to go over it until the very end of the discussion on consonants.

I don’t want to throw all of them at you at one time, so we will take them in pairs of two per lesson.

This first lesson will be covering the [k] and [s] consonants in Japanese.

The [k] and [s] Consonants in Japanese

The [k] sound combined with each of the five vowels creates the following:

The [s] sound combined with each of the five vowels creates the following:

Listen again to the し sound in the second group. This is a perfect example of a sound in Japanese that is close to, but isn’t quite the same as English.

In English, you protrude your lips when you make a [sh] sound, such as in the word “shoes.”

When you make this sound in English, it feels as if the “sh” sound is being created in between your lips and your teeth.

Try it now and see what I mean.

When it comes to making the し sound in Japanese however, it feels like the sound is being created in the middle of the inside the mouth.

It’s a different feeling from the English counterpart, and also a slightly different sound.

Keeping with the philosophy of “following your ears” go ahead and listen to that particular sound a few more times and try to recreate it yourself.

Here are the correct ways to write these kana:

Don’t worry if you’re beginning to feel like this is a lot of work. It usually seems that way at first, but once you get used to them they become rather easy.

It’s kind of like how you can use all 26-letters (x2 for upper case) in the English alphabet without any problems.

Example Words for These New Sounds

Here are some new words that illustrate what you’ve learned so far.

Remember, it’s not important to memorize the English meaning. Just listen to them and get used to how they sound.

Action Exercises for This Lesson

Here’s what you need to do before moving on to the next lesson:

Once you’ve completed all of the above, it’s time to continue on!

Go Back to Lesson 3!