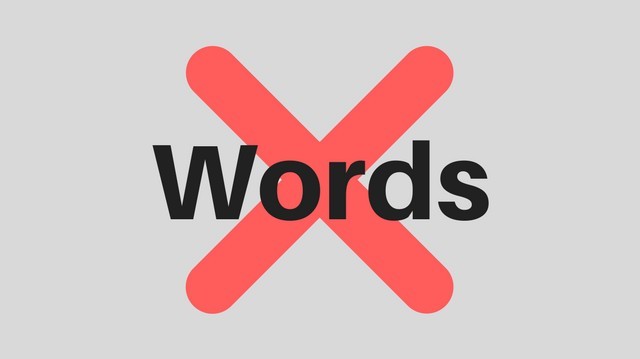 Guys I need to confess something right now: I’m afraid.

I am afraid that most of you read over that title and didn’t give it much thought. I need to drive this point home, because once you truly understand it, you will NEVER approach language learning in the same way again!

People speak in syllables, not words!!!

Now forgive me if I am coming off as a little bit (a lot?) intense right now, but that energy your hearing in my voice (text?) is just my passion that I’m trying to convey in this message.

This point is so incredible important, that we are going to spend this entire lesson on it so that you truly understand what I’m trying to say, and why it is so vital for anyone who strives to learn a new language.

Let’s take it part by part. First I will explain how most people learn a foreign language on a word-by-word basis and then I will explain why they struggle to understand when natives speak.

This will naturally lead into the explanation of how a complete sentence sounds from an ‘audio perspective” and it will then become clear what I mean when I say that people speak in syllables.

How Most People Learn a New Language

Most people are taught individual words at first when they learn a new language. In addition to this, it is very often in a written format without accompanying audio.

A natural consequence of this is that when the student encounters a sentence full of words, they assume that the correct way to say the sentence is simply to speak each word, one after the other, at a rapid pace.

Unfortunately, this actually isn’t true as the sounds of words change within the context of a complete sentence.

This is something that, for example, happens more often in English than Japanese, so I will illustrate this concept with an English sentence.

The Concept of Speaking in Syllables – in English

Let’s say that you have a friend who makes animals out of towels like they sometimes do in certain fancy hotels.

You see him pick up a towel and then ask him the question:

“What are you going to make with that towel?”

Now assuming you were in the process of learning the English language, and you had already learned all of the above words in isolation, you would most likely be able to understand the sentence just from reading it.

If you then read the sentence out loud on a word by word basis it would sound like this:

As an English native, you no doubt feel that this sounds weird, even though it’s technically correct.

If a person talked to you this way, you would understand them, but you would know that English isn’t their first language because that’s not how natives speak.

A native would actually say the sentence like this:

The point I want to make is that the second audio example is phonetically realized as this:

You notice a few interesting phonetic changes that occur when words are put next to each other like this.

The first this is that the [t] at the end of the word “what” gets changed to a [d], and that [d] sound actually fuses into the following word “are” as [dar].

The word “going” gets shifted to [gonna].

The ending syllable of “make” gets fused with the following word “with” as [kwith]. So, the two words “Make with” sounds like [may-kwith].

The ending [t] in “that” gets dropped since the following word also begins with the same sound: “that towel” turns into [tha-tah-wel].

As you can clearly see, learning the language on a word by word basis and then assuming that full sentences sound just like the individual words put next to each other, is actually quite deceptive.

Words are like kids on a playground: Some of them play nicely with others, but some of them do not.

Just because a word sounds a certain way in one situation, doesn’t necessarily mean that it will always sound that way.

Is it The Same Way in Japanese?

To a certain degree, this situation where the sounds of words change when they are combined with others in a sentence occurs in all languages.

Luckily for you, it’s not to a very large degree in Japanese.

Due to the way that Japanese is structured, almost every single syllable is comprised of a single consonant and a single vowel – in that order.

This actually makes the language pretty consistent, but there are still some situations where it will “sound different” when you hear a native say something, when compared to how it looks in the written form.

Here are the sounds that will change, or occur when one word ends and the next one begins:

We are going to cover these things in the next lesson and see some examples of each.

Final Thoughts on This Topic

The main thing to learn today is that the sounds of the Japanese language will sometimes change within the context of a complete sentence.

This means that it is not enough to learn how each word sounds by itself. You have to listen to those same words alongside others in full sentences.

This is probably the hardest part of learning spoken Japanese: Listening to a long string of sounds and being able to pick out where one word ends and the next one begins.

This is not only necessary to do, but it is also expected of anyone who plans on using the language fluently.

Let me finish this section off with an analogy:

Let’s say that you are playing with Legos and you want to build a miniature town.

-Each Lego piece is like a single sound of Japanese.

You have to know which size and color you need to use in order to combine them correctly into the different kinds of houses for your town.

-Each house that you make is like a single word in Japanese.

-Once you have the Lego town finished, you have a complete sentence in Japanese.

Note that the finished town, as a whole, looks a little bit different from and is greater than the individual houses (words) that it is comprised of.

So if you want to build towns, you have to practice building towns! Making lots of houses, but never going any further than that won’t cut it.

Now that you’ve learned all about the individual Lego pieces (sounds), and you’ve learned how to build different kinds of houses (words), it’s time to focus on town building – Also known as complete sentences in Japanese.