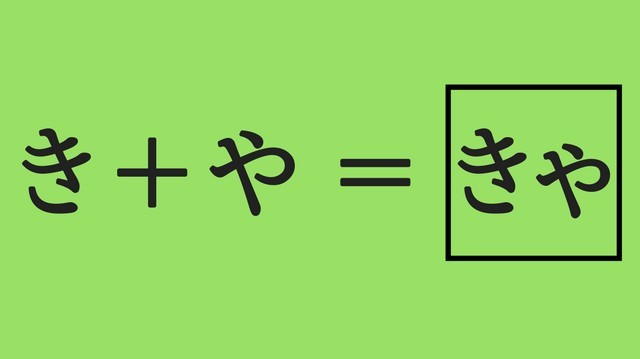 We’re now at the final section of hiragana characters and the individual sounds that they represent.

This part gets interesting as we once again take the basic hiragana that you’ve already learned and alter them slightly in order to represent some new consonant and vowel combinations.

This part can kind of be thought of like a mathematical formula. Here’s what I mean by that:

Take any hiragana that is a Consonant + い [i] vowel, and combine it with one of the three [y] kana: や, ゆ, orよ.

Here are some examples:

Note that when this happens, the [i] sound from the first kana disappears. What this means is that きゃ = kya is a single sound.

[kya] is the correct way to say it – It’s just one syllable. [ki-ya], which is two syllables, would be incorrect.

This sound might be a little weird for you at first, so just be sure to pay extra close attention when you listen to it, and make sure you are producing a single sound when you make it.

Also something to note is that, you will probably have noticed that the [y] kana are only half of their normal size! This shows that they belong to the normal size hiragana that immediately precedes them.

Even though きゃ is created by using a normal sized kana in conjunction with a half-sized kana, it is still considered as one single mora.

The first six groups of You-on:

It obvious why these get called “combination hiragana” from the way they are constructed. However, they are actually called you-on in Japanese.

There are a total of eleven groups. Here are the first six groups now:

And of course there are the voiced counterparts as well:

The [y] sound is changed to a [h] sound when the first kana used is the し [shi] character:

It changes once again to a [j] sound when じ is used, which is the voiced counterpart to the above し:

When we use ち we get the [h] sound again:

Thankfully, from here on out it’s all [y] sounds with these you-on. We will see the next group now and then all five remaining groups in the following lesson:

A few words to help learn the sounds:

Now here’s a question for you to answer: “Will a [y] hiragana always fuse with a preceding Consonant + [i] kana?”

There will occasionally be times where they do not combine, and are instead two separate sounds.

The tricky thing is that, at first, it can be hard to distinguish the difference between these two situations.

Take a look at these next two words and see how close they sound to one another, and yet they are still different:

Did you catch the difference between the しゃ [sha] sound in the first word and the しや [shiya] in the second word. This ought to help you tell the difference bewteen the combination sounds and regular ones.

If you can’t quite tell the difference yet, just be aware that it exists and listen a few extra times to help train your ears.

It also helps if you practice making the two sounds yourself. Try saying しゃ [sha] which is one mora, and then しや [shiya] whch is two mora, a few times.

Some Training to Lock the Information in:

There’s quite a bit of information in this lesson, but it’s pretty easy to grasp since you’ve already spent so much time working on the information from all of the previous lessons.

Today’s task list is rather light compared to the ones you’ve done before. Here is it:

Are you ready for the final lesson on the individual sounds of Japanese? Let’s do it!