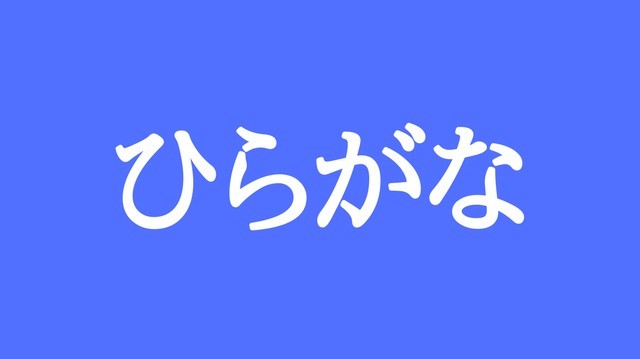 This course will utilize hiragana, which is the first part of the Japanese writing system (out of a total of three), in order to visually represent the sounds of Japanese.

Hiragana is great tool to use since each character in the syllabary (called a “mora”) represents a sound, but no meaning.

We will start off with the five vowels of Japanese (e.g. あ = a), and then move on to the consonant + vowel combinations (e.g. か = ka) which comprise the majority of the sounds.

During the introduction of each new sounds and its accompanying mora, I will show you the English transcription in order to jump start your progress of hearing and memorizing it.

However, this initial use of English to represent Japanese sounds will be the only time you’ll see it. For the example words and phrases in this course, only hiragana will be used, along with the audio files of the native Japanese speaker.

I designed it this way because Japanese doesn’t use exactly the same sounds that English does.

It can therefore be misleading to use our alphabet when learning Japanese since there will be an unconscious tendency to use English sounds that do not belong.

This brings us to the motto for this entire course: “Always follow your ears.”

I want you to primarily use your ears to learn the correct sounds of Japanese. The hiragana will serve as a helpful assistant, but it should not be the star of the show.

The process for learning a new sound will be that I give you an audio clip to listen to, along with the corresponding hiragana and a onetime transcription in English.

I want you to listen to the native, and then repeat the sound yourself.

This practice is absolutely crucial, so I will repeat it once more for emphasis:

Listen to the Japanese speaker, and then repeat the sound you hear!

This process of listening and repeating will train both your ears and your mouth in the comprehension and utilization of the correct Japanese sounds.

It’s important to practice speaking these sounds in order to attain the right muscle memory that’s used when speaking Japanese.

The sounds aren’t necessarily hard for a native English speaker to learn and mimic, they’re just different. They will probably feel a little weird to you at first, so you need to get used to them.

Eventually they will begin to feel natural and normal.

Since this course will utilize a large amount of hiragana, it’s important that you approach each section that teaches new characters (sometimes simply called “kana”) so that by the end of Section 1, you will have the entire syllabary memorized!

Now, you may already know all the hiragana if you’ve studied Japanese previously. If that’s the case, then you can skip the parts where I instruct you to practice them, but if you don’t already know them, then these sections are designed specifically for you.

I will include some writing practice for each kana so that you can memorize the hiragana script at the same time that you learn how each one sounds in Japanese.

The Overall Layout of the Course

This course is laid out into three primary sections:

The thing that’s important to be aware of is that the way Japanese is spoken will change slightly at each level.

In Section 1, you have to start with the individual sounds since they are the building blocks for everything else.

But just because a mora sounds a particular way in isolation, doesn’t mean that it will always sound that way when it’s combined with other mora in a complete word.

In fact, there are some sounds that only appear within a complete word!

That’s what we will explore in depth in Section 2.

Taking it another level higher to Section 3, I will tell you that not all words play nicely with each other, and the sounds that a word makes can change depending on which word appears right before it, or right after it.

As for what the format of each individual lesson will be like, I figure that the best way to tell you is simply to get started with the first one and let you see it for yourself!

Let’s learn the five Japanese vowels and begin the process of mastering them now!

Go Back to Lesson 1!