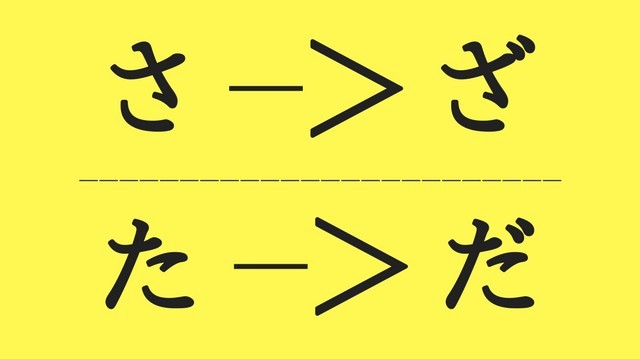 Today we will work one two more consonants that are identical to ones you’ve already learned, except that the new ones will be voiced.

We will go over [z] which you’ve probably guessed is the counterpart of [s], and we will also go over [d] which you may or may not know is the voiced [t] sound.

There are a couple of special sounds that belong in these two groups, so see if you can spot them in the next section before we move on to the special notes that will go over them in depth.

The five vowels combine with [z] to create:

The five vowels combine with [d] to create:

Special Notes on the [ji] and [zu] sounds.

The first thing you will notice is that there is no [zi] or [di] sounds!

They simply don’t exist, and are instead replaced by the [ji] sound.

Now why are there two different ways to write this same sound? It is believed that at some point in historyじ and ぢ represented two sounds that were nearly identical, but still slightly different from each other.

However, they are the exact same sound in Japanese nowadays.

Something else you should know is that じ is almost always used in writing for [ji]. The alternate ぢ only gets used in a few specific words.

That then brings us to ず and づ both being used for the [zu] sound (sorry, no [du] sound!). It’s basically the same situation as above with [ji].

They both make the same sound, but ず gets used 99% of the time in writing. I will say however that づ gets used in the word つづく which means “continue” and is a very common word that you are likely to see quite often.

Your daily dose of becoming awesome:

Did you realize that you’re on the path to awesomeness?!

You are working on learning the Japanese language, which is considered by many to be the hardest language for English speakers to learn.

But as long as you take it one step at a time, and progress though the language in a intellegent manner, you’ve got nothing to worry about.

I think I’ve mentioned this before, but by starting your journey by learning the sounds of the language before anything else, you set yourself up for accelereted progress later on since you won’t have to worry about “not fully hearing” the Japanese language.

After you graduate from this course, you can then focus all of your energies on learning the meanings of the words you hear.

We’ve only got one section left for these types of voiced consonants. It’s kind of a special one too, since there is a surprise for the final group!

Are you curious? Let’s check it out now!