Perhaps the most well-known book on learning Japanese kanji is Remembering the Kanji written by James Heisig. It is a book that teaches you the meaning of all “general-use” kanji (a little over 2,000 of them) by using what he calls “imaginative memory” in creating stories with the individual parts of the kanji (from here on referred to as “radicals”).

You may have heard of this technique before, using mnemonics to create crazy, silly, and weird stories with the kanji’s radicals.

It’s so effective that you quickly memorize the kanji, and then with a little reviewing here and there, remember them forever.

How does it work exactly? What are the huge advantages and the few drawbacks of this book? Read on to find out!

First off, there are some simple kanji that you will just have to straight up memorize.

Thankfully they are mostly pictographs – they actually resemble the physical item that they represent! So for example, the kanji for sun 日 looks like a sun, although it has been squared off so that it fits nicely on paper next to other kanji.

After you learn a few of these “picture kanji” you’ll then run into kanji that are comprised of several different radicals (each complete part is called a “radical” which is different from the smallest unit of a kanji which is a “stroke” or a single line).

So this kanji right here 晶 is comprised of three separate radicals, although each radical in this example is the “sun” kanji that you saw earlier. This is where the method of Remembering The Kanji kicks in:

Although it may seem a little weird to spend all this time memorizing a story in order to recall the meaning of the kanji, it is actually a much more effective method when you realize that you’re going to be applying it to literally thousands of kanji.

The keywords for each radical will be used again and again, so instead of remembering 2,000 complete kanji, you only have to remember about two hundred keywords (each radical), and from there it is easy to remember the stories that the radicals tell, which then leads to the kanji’s meaning.

What’s the Advantage of This Method?

The beauty of this book is that it teaches you the most common meaning of each kanji in a way that is quick to memorize, and easy to recall.

A quick summary, I know!

You will probably want to combine studying new kanji with a system of reviewing the old ones, to truly lock in what each one means and the stories associated with each.

What I like to do is open it up to the index in the back and just start recalling the meaning of each.

It’s not as efficient as a Spaced Repetition System, but it’s a lot quicker and easier to implement. 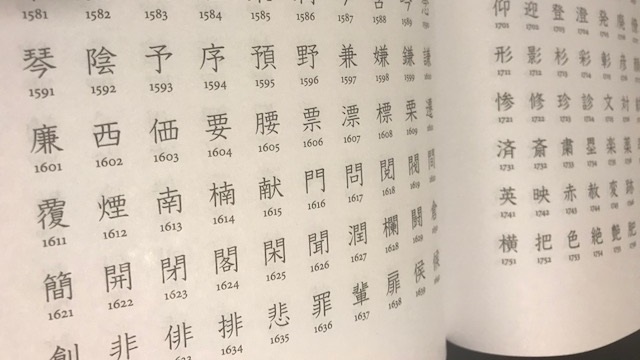 The only problem with reviewing kanji this way is that there is a small risk that you will memorize the order of meanings, rather than each kanji’s individual meaning (kind of like how young kids can memorize a book without knowing how to read the words).

But the solution to this problem is to recall the keywords and story associated with each kanji.

It’s kind of like when/if you took an advanced math classes in school where you had to show how you came to your answer by listing out each step in the whole process.

As long as you can identify each keyword associated with each kanji’s radical, and then tell yourself the story that leads to the kanji’s meaning, then you can be confident that you truly do know each kanji’s meaning and you will be able to recall it later when it appears in a book, on the internet, or wherever.

Using this system, people have learned all the common kanji in as little as two months (about 40 kanji/day) or taken their time with it and memorized about 20 kanji per day, which would be just over three months.

Both results are impressive and it really just depends on how much time you decide to put in each day.

As a final note on the system, this book also teaches you the correct stroke order of each kanji. Some people feel that this is vital to know, others think it’s useless since 99% of everything is digital now, but no matter how you feel about it, Heisig keeps it simple in this book:

There are occasions where the stroke order deviates from the above two rules, but for the most part this will suffice.

What Are the Drawbacks?

The primary drawback is that you do not learn the pronunciation of the kanji.

This is actually intentional since it is far easier to learn only one piece of information per kanji (the meaning) instead of trying to learn several things all at once (the meaning and each of the several readings).

As you may know, the way you pronounce a kanji can change depending on how it’s used in a sentence, and if it’s by itself or part of a compound word comprised of several kanji.

The philosophy of this book is to lay down a solid foundation of understanding the most common meaning of each kanji so that you never forget them, and from there you can easily add the different readings each one has, and any lesser used meanings as well.

The second and third drawbacks to the book are what I just touched on a moment ago: you don’t learn alternate meanings for each kanji, nor do you learn the compound words that each kanji is commonly a part of.

There are two ways to overcome the drawbacks of this book. Let’s go over them now.

How Do You Fill it the Gaps Left by the Book?

First off all, there is a second book on Remembering the Kanji that is aimed at teaching you how to pronounce them.

After you’ve completed the first book and learned all the meanings, it’s a pretty simple process to go back and start matching the verbal part of each kanji to its visual part and definition.

You can absolutely follow this route if that’s what you’d like to do, but I actually think that there’s a more enjoyable method.

Read tons and tons of interesting Japanese books that use furigana!

Since you’ll already know the meaning of the kanji once you’ve finished with Remembering The Kanji (part 1), you’ll understand what’s being said when each kanji appears in the dialog, and the furigana will be there to allow you to memorize how to say each one.

I like this approach since you’ll get the correct readings each time they actually appear in real life. This will allow you to “learn them in action,” rather than memorizing “when to use the kun-reading vs, when to use on-reading and such.”

It seems so simple when you think about it, but few people are taught to learn kanji this way.

Well… few non-Japanese people. I’m pretty sure that Japanese kids have been learning the correct kanji pronunciations this way for as long as manga with furigana has been around!

Where Can You Get It?

Now you know the method, what the advantages and disadvantages are, and even how to compensate for what the book lacks.

The biggest benefit of the book is that you can easily learn the primary meaning of all 2,000+ “daily use” kanji in just about 3 months.

I would say that it takes about 30 minutes per day to learn about 25 kanji using the book.

25 kanji times 90 days = 2,250 which sounds simple enough, but is actually pretty awesome when you realize that some people struggle with kanji for years before mastering them!

Pick Up Your Copy of Remembering The Kanji On Amazon.com By Clicking Here Now

And something else that is really cool is that, since there are only a couple hundred radicals that are used to create all kanji, once you’ve learned the keywords associated with each radical, you can then use them to create your own stories for any new kanji you encounter after finishing this book.

There’s practically no limit, although it might not be all that useful to learn the 50,000+ kanji listed in The Dai Kan-Wa Jiten!!!

So whatever number of kanji you decide you want to learn, you can do so by using the method taught in Remembering The Kanji.

Once you’ve gotten it, let me know how many kanji you plan on learning each day!

I’d love to hear your feedback on this book and the method it uses!